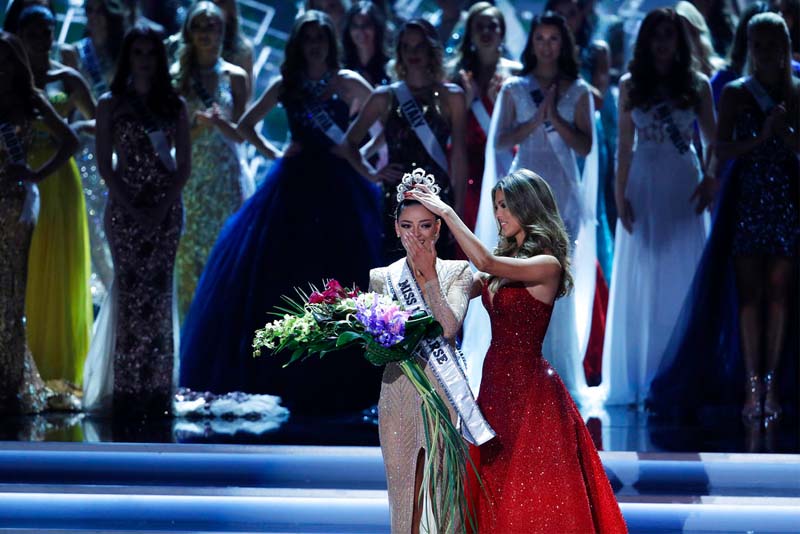 Demi-Leigh Nel-Peters was crowned as the newest winner of Miss Universe 2017 held in Las Vegas on Sunday night. The South African beauty won the prestigious pageant over 90 beautiful contestants from the different parts of the universe. In the final round, the 22-year old beauty queen beats out Miss Colombia Laura Gonzalez who took the first runner-up spot while Davina Bennett representing Jamaica came in as the second runner-up. She takes over for Iris Mittenaere of France, who was crowned during last year’s competition in the Philippines.

You may have already known her since it’s currently the trending topic in all social media and in the world wide web . To know more about her, here are truly inspiring facts about the new reigning Miss Universe:

In an interview with Jacaranda FM, she shares,

“It’s always been his dream to go into the hospitality industry. I have a 10-year-old half-sister, Franje. She is my dad and step-mom’s daughter. She was born without a cerebellum and is completely disabled. She is my biggest motivator in life (and she has the most beautiful lashes any girl can dream of).”

Because of her experience, she became active with her participation in a self-defense program that she helped develop for women. In her interview with Jacaranda FM, she says,

“Nothing is impossible. The word itself says ‘I’m possible’. You are worthy, you matter and you are capable of more than you could ever dream of, all you have to do is try.”

When your first set of parents arrive in Vegas and you coincidentally run into them at lunch #selfie 🎉🎉🎉🎉🎉 I'm so blessed to be sharing my Vegas journey with all four my parents! I am everything I am because of them💜#MissUniverse #missuniversesouthafrica #southafrica

Dad and mom nr. 2 in the house 🤗🤗 #missuniverse #southafrica #rehearsals

“They are my biggest supporters and they have always believed in me and dreamed with me.”

It says in her official Miss Universe bio that she “recently earned her degree in Business Management at North West University after making history at her high school for holding two leadership positions.”

Can you tell how excited I am… One more sleep till I leave for VEGAAAAAS! 🇺🇸👑👗 #MissUniverse #southafrica #roadtomissuniverse Photo by @hanrihuman Smile by @cahidentalpractice ❤️

This was what she had to say as her winning answer:

“As Miss Universe, you have to be confident in who you are as an individual. A Miss Universe is a woman who has overcome many fears and by that, she is able to help other women overcome their fears. She is a woman that nothing is ever too much to ask for. And I think that is exactly who I am.”